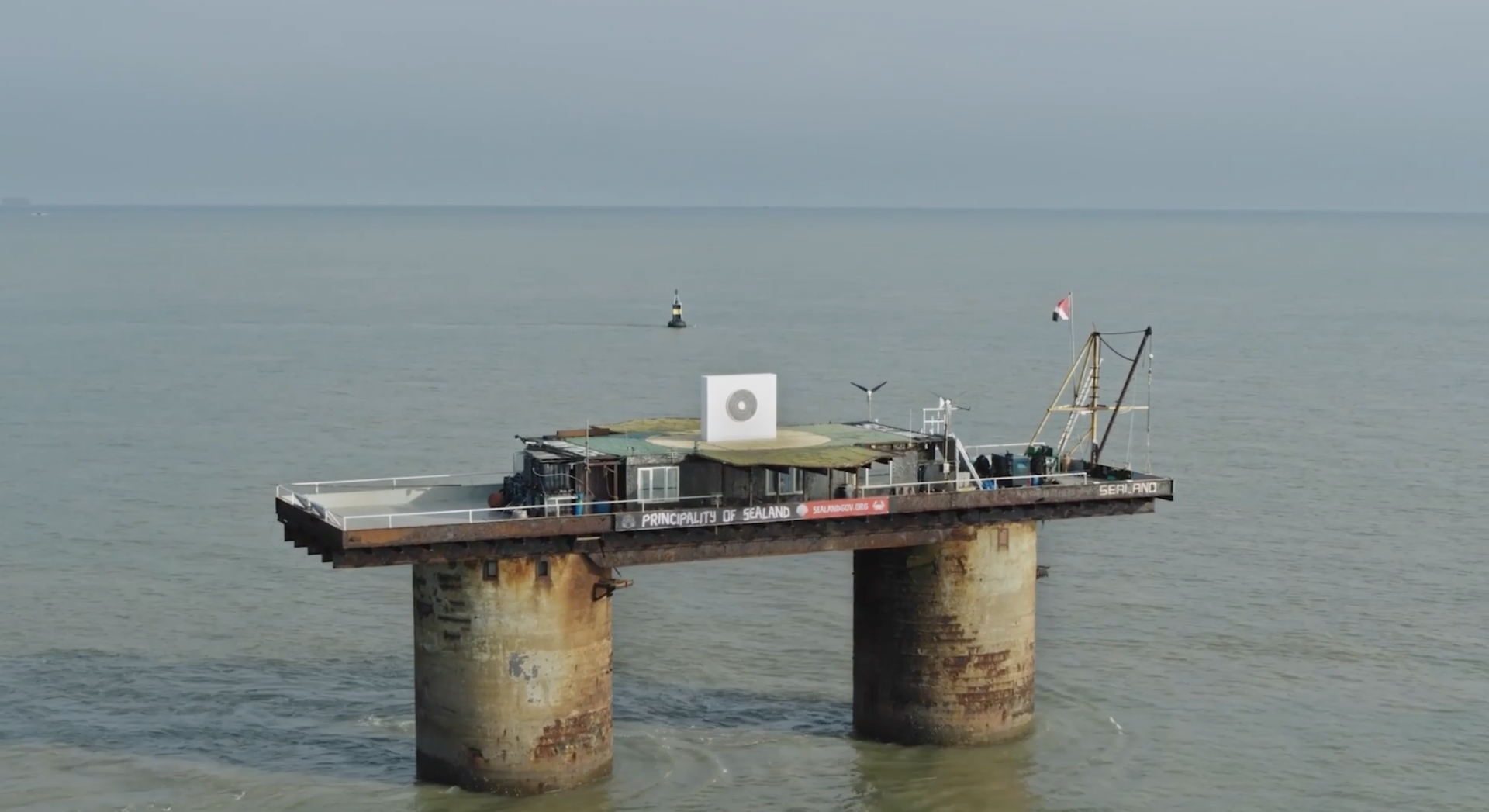 The IBM 305 RAMAC, introduced in 1956, was the first computer to include a hard disk drive. The drive, the IBM 350, stored up to five million characters of data in the magnetic surface coatings of a stack of 52 disks, each 24 inches in diameter, that rotated at 1200 rpm inside a glass cylinder. For “companies [who] long dreamed of an accounting system capable, in a single operation, of recording transactions as they occur,” IBM said in a promotional film, the 305 RAMAC, short for Random Access Method of Accounting and Control, was a “dream come true.”

This transformative milestone in the history of computerized bookkeeping, where millions of characters of data are inscribed on an array of large, technologically obsolete, shimmering discs, is, improbably, not included in Portraits of a Mind (2019) by Robert Alice. Portraits of a Mind is an elaborate art project in which a series of programmatically historic artifacts for the blockchain era are conjured out of paintings, NFTs, media, and software. One of the forty nodes of the globally dispersed project, Block 21 (42.36433° N, -71.26189° E), became the first NFT sold by Christie’s in October 2020. (The complete work also includes a large, disc-shaped painting and associated media and metadata.) A second node, Block 34 (51.895167° N, 1.4805° E), is up for auction at Sotheby’s in Hong Kong April 27.

A brief description of the project may be impossible by design. Artist Ben Gentilli adapts the historical markers of significance from conceptual art, literature, and technology, to create a decentralized “portrait” of the pseudonymous founder of the blockchain future, Satoshi Nakamoto. Working under his own cryptography-inspired, nongendered pseudonym Robert Alice, Gentilli painted a complete transcription of Nakamoto’s urtext, the v0.1.0 code for Bitcoin, across forty circular canvases. Each holds 322,048 digits of hexadecimal code on a disc 50 inches in diameter. Each is associated with an event, person, or place from the last seven thousand years that Gentilli has constellated into a momentous yet esoteric history of the blockchain. And each is paired with a digital element, whether a software feature or video, connected to its token: Block 21 publishes the time zone of its current location. Block 34 has painting details and cartographic references layered in a 4k video loop. Together, the nodes form a network of objects and references that Alice hopes to inscribe into art history as indelibly as his tokens are minted on the blockchain.

The deployment of machine code is a form of abstraction, which turns out to be an alluring strategy for contemporary painters tracing society’s networks of power.

In its complexity, the realization of this context surpasses even the intricate production of the paintings themselves. The project is described by Alice as a “digital fingerprint carved out of paint,” [cf.] but they appear to be the opposite: the tiny digits of hexadecimal code are laid down in shimmering acrylic paint on top of a dark abstract swirling undercoat. The arced sectors radiate out from the hole at the canvas’s center like the Black Rock City urban plan for Burning Man. Or like a magnetic hard disk; with 12.3 million digits painted onto forty discs, the information density of Portraits of a Mind exceeds that of the IBM 305 RAMAC.

Associations with historical factoids are the project’s stock-in-trade. Though Occam might think its title simply followed Blocks 1 through 20, which went directly into private collections, Block 21 was marketed to the public as a reference to the 21 million BTC that will ever exist. Block 34 is linked to a short-lived attempt to create a place for information to exist beyond the reach of national governments. In 2000, a group of cryptography activists launched HavenCo, an “offshore” data-hosting service on an abandoned military platform off the coast of England that a British pirate radio broadcaster had seized and declared a micronation in 1967. His son, the self-styled Prince of Sealand, was chairman of HavenCo until he seized control of it, the technologists bolted, and the venture collapsed. For the brief moment last fall when Block 34 was choppered onto Sealand’s helipad for an ersatz exhibition, the team of observers and art handlers visible in Alice’s video boosted the imaginary country’s population sixfold, to twelve.

Pairs of digits on each canvas are overpainted in gold. Their seemingly random placement invites questions and interpretation. They could be the dispersed digits of the Block’s associated latitude and longitude coordinates. Alice notes they’re laid out like the nodes of a decentralized network, a reference to an iconic 1968 Rand Corporation diagram. They also suggest the digits look like stars, other seemingly random points onto which humans have been projecting portent and meaning for millennia.

As with so much art before it, the utility on offer from Portraits of a Mind is immortality.

This, then, is the overarching project: construct authority and significance from the arbitrary, using the strategies of art to imbue objects with transcendence, and transfer them to enlightened patrons. This is not modernism’s utopian rejection of history, but an opportunistic continuation of it. Alice uses history’s tools not to dismantle history’s house, but to build a wing for the blockchain and its visionaries. As with so much art before it, the utility on offer from Portraits of a Mind is immortality.

The art historical foundation on which Portraits of a Mind is built is conceptually driven painting of the 1960s. Alice goes so far as to retcon two of their precedents, Roman Opalka and On Kawara, as “blockchain artists,” primarily for their life-spanning, unidirectional projects of painting numbers. Opalka began painting all the numbers from zero to infinity in 1965. Begun in 1966, Kawara’s “Today” works are essentially painted timestamps of the artist’s life, marking the date and place of their making.

Beyond their immutability, some aspects of these projects that go unmentioned by Alice point to other references that resonate more fully with the content of Portraits of a Mind, not just its concept. Opalka’s numbers aver any narrative beyond the relentless addition of one, while Alice’s digits, indecipherable to humans, constitute an executable codebase whose effects are now felt by the entire world. And Alice notes Satoshi’s insertion into his code of a Times of London headline about the 2008 global financial collapse without connecting it to the newspaper clippings Kawara often included in the lids of his custom-made painting boxes. Even the purest of these conceptual constructs turn out to be enmeshed in the cultures that spawned them.

“By radically inserting the headline of a newspaper article that lambasts the continued bailout of banks following the 2008 crisis, Satoshi Nakamoto makes no aspersions as to what his code has been designed to change in the world,” Alice writes in a Medium post about the project. “By placing the very source code in not just philosophical but literal opposition to the existing global financial structure, the source code moves further from simply executable code to a text with narrative and emotional lines that carries with it provocative political undertones.” By transcribing Satoshi’s code as it was compiled, rather than as it was written, Alice renders this foundational ideological content illegible, but not invisible. The deployment of machine code is a form of abstraction, which turns out to be an alluring strategy for contemporary painters tracing society’s networks of power.

In a 2011 lecture at the Smithsonian American Art Museum, Julie Mehretu discussed the commission she received in 2007 to paint a mural for the lobby of the headquarters of Goldman Sachs. Through her highly evolved process of abstracting an assembled archive of historic and media images, logos, and visualizations of data, Mehretu set out to depict in painting the history of capital, its flow, and its systems. She began work on the 80-foot mural in 2008 as her patron was engulfed in the same global financial crisis that moved Satoshi to write the Bitcoin code.

A similar abstraction of network structure appears in recent paintings of Rick Lowe, currently on view at the Whitney Biennial in New York. The large abstract traceries of tiles are part of a larger project, Black Wall Street Journey, which explores the history of African American economic development and the political opposition and violence that seek to constrain it. Lowe’s practice notably centers on his community organization in Houston, Project Row Houses. He created his paintings by disassembling found images of socially generated networks: land use, development, and historic redlining maps; the visual materials of community building activities; the web of dominoes at the end of a game. In a 2021 interview,  Lowe explained how the resulting allover, illegible abstractions are meant to depict resilient, decentralized (social) networks, which coalesce into—or at least hint at the existence of—larger, historical mapping and narrative.

Portraits of a Mind is optimized to be revered in the world whose imminent overthrow it portentously proclaims.

HavenCo, the historic node of Block 34, ultimately failed for many reasons, economic, political, and human. The companies who might have wanted to keep their data beyond the reach of nation-states were ultimately more interested in doing business in those nation-states, too. The complex international definitions of statehood that Sealand was LARPing ultimately depended on the same international systems to recognize and uphold them. And operating in a self-proclaimed principality leaves you at the complete mercy of the self-proclaimed prince. For better or for worse, Bitcoin and the blockchain world it has spawned are still embedded in the human world. This paradox is itself embodied in Alice’s project. Portraits of a Mind is optimized to be revered in the world whose imminent overthrow it portentously proclaims.

Beyond the trappings of credibility, the seven-thousand-year history Alice constructs for Bitcoin is an exercise in generating an aura of inevitability, to affix the blockchain’s foundations far deeper than its ostensible genesis in the 2008 financial crisis. Evoking the power of a sacred, founding text, Alice draws his paintings’ concept and form from the most important ancient artifacts of our civilization—the Gilgamesh Tablet, the Rosetta Stone. Such objects were not unique in their time or created to be historic; they only became so later, through the practice of culture and history, and only long after the civilizations that created them had disappeared. By distributing them around the world, is Alice improving the odds that some Portraits of a Mind will survive our society’s looming collapse? What will they reveal about the moment of their creation to the culture that unearths them?

Greg Allen is a writer and collector based in Washington, D.C. He has maintained the blog greg.org since 2001. 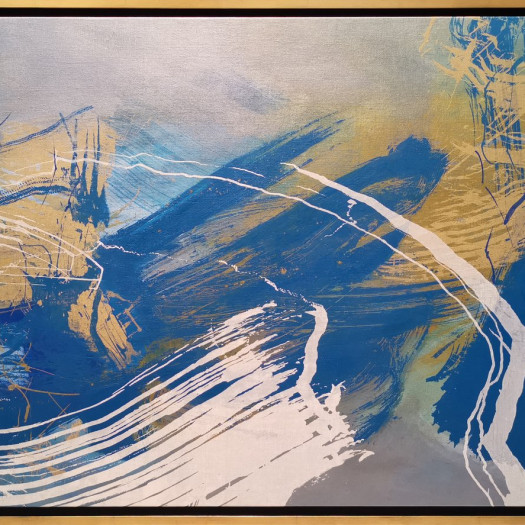